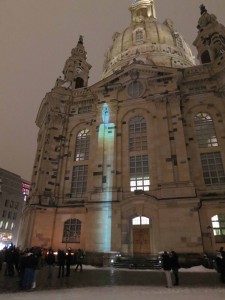 A long day at the studio, working on a woodcut and talking with charming visitors from studios in Gothenburg and Finland. The Grafikwerkstatt has numerous connection in northern Europe but none as yet in the UK, something to be talked about! In the evening, to the Germany Military History Museum to see http://www.come-together-der-film.de/ a new film about the 13th February. Come Together directed by Barbara Lubich is altogether excellent. In German with English subtitles it is a thoughtful documentary that addresses both the history and current political complexities of this anniversary. Of great interest here in Dresden, it was standing room only. There is also in the adjacent space an exceptionally strong exhibition “Right-wing extremist violence in Germany 1990-2013 with photographs and text by the American photographer Sean Gallup.

Wednesday 13th February, the commemoration of the destruction of Dresden by the Allies.

A major snowfall overnight and I take an early walk along the Elbe to town to check out the barricade building, for the enemy today are the neo –Nazis who are due to arrive later in the day, although they are banned from the historic inner city.  The streets are empty and hushed by the snow.  I contemplate again the descriptions I have read of those fateful nights and days in 1945, this year as then, yesterday was Shrove Tuesday and today is Ash Wednesday.  I have difficult decisions to make as to where I should be during the day as there are different groups and dialogues on offer, including a demonstration that follows the ‘Path of the Perpetrators’. 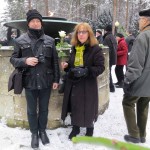 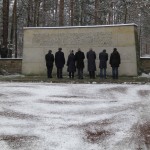 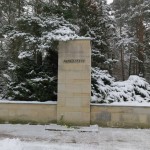 I am invited by the City of Dresden as their guest for the official commemorations and I feel it appropriate to take up this outstretched hand.   The group include members of the Dresden Trust, Terry Duffy and John Witcombe the new Dean of Coventry Cathedral who has only been in post 3 weeks. He by his own admission feels, as I do, on something of a steep learning curve. We are taken out of town to the Heidefriedhof, the cemetery where many victims of the destruction were buried. Overwhelming picturesque in the deep snow this is a formal occasion, with uniforms, white commemorative roses and significant police presence both in uniform and plain clothed. A tree lined avenue to the memorial, a sole violin player and an a cappella choir. The mayor Helma Orosz speech is a mixture of sentimental as in stories of heroism from the events of 1945 and fiercely political, (CPD) in her commitment for the city to reclaim this day from the right. This is a divisive point for the right are allowed to be present in their official capacity at the ceremony and therefore it is one that some members of Jewish community of Dresden now boycott. Immaculate white roses provided by the bucketful are laid at the memorial and at the ‘Rondel’ where fourteen pillars commemorate sites of atrocity from Coventry to Auschwitz. 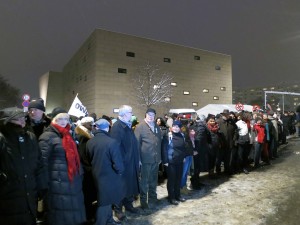 We return to the city where there are now hundreds of people on the streets. There are also 3500 police on the streets who on the basis of previous years’ experience are instructed to go softly softly.  Orosz gives a more upbeat speech at 5pm and then the crowds start to disperse to form the ‘Menschen Kette’, the symbolic human chain both of commemoration and against extremism. I go to the new synagogue as does the press and the official entourage and at 6pm for 10 minutes the entire city is silent and at a standstill, blockaded by a human chain of over 10,000 men, women and children linking arms.

After the Menschen Kette I go with Terry Duffy first to the Kreuzkirche for a memorial concert, Brahms, Mussorgsky and Shostakovich played by the Dresdner Philharmonic and then to the Cathedral for an ecumenical service for Ash Wednesday in which John Witcombe in participating. We emerge into the old city, now floodlit and at 9.45pm every church bell in the city tolls for 15 mins. This was the moment in 1945 on a warm spring like night when the incendiaries and the first of 1000 Lancaster bombers came over the clear skies of the city.

As the evening continues there are demonstrations against the neo Nazis organised by different Anti Nazi groups . The standoff late in the evening at the Hauptbahnof (main station) is largely peaceful with the neo Nazi group of about 600 effectively stopped by a blockade of thousands. Next year I hope to be here again, but more ‘on the streets’, on the ‘Path of Perpetrators’ and blockading the Neo Nazis. I have good reason. I take the night tram home.

A long day in the studio, and lively and informative discussions about the previous day’s events. I recognise how little I know or understand about how life was here under the DDR and the complexity of feelings for each person about what their parent or grandparents did or don’t do both under the Nazis and under the DDR and the Stasi. Everyone here is remarkable in their generosity in explaining issues to me, I try to keep it all in German and there is a large dictionary to hand.

After work I go to the Saxon Memorial Foundation down near the SLUB, the Saxon State Library and meet Gabi Atanassow who works on the archive of Jews deported from Dresden. We look at my family files and she provides me with some interesting new pieces of the puzzle. She is keen to have further information and photographs all of which I can provide. She also directs me to other archives which are not online but require me to visit and look at microfiches. We discuss the idea that my mother’s former school, the Gymnasium in Plauen would like to have archive material and perhaps develop a project with the students. I recognise that back in London there is a vast amount of work to be done, including scanning every piece of paper in the family archive boxes. There is of course the possibility that in these numerous letters and forms, which I cannot decipher, there is significant history.