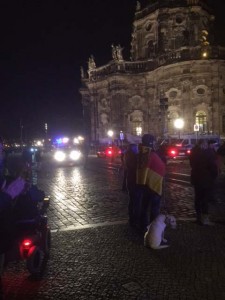 Having found out this morning that all demonstrations in Dresden had been banned today because one of the leaders of Pegida had been’ credibly threatened’, I nipped on the no 4 tram down to Theaterplatz for 6.00 to see what happens when there is no demo. A very cold, clear night, more police and police vans than one would have thought possible  in a city the size of Dresden and desultory groups perhaps a couple of hundred people hanging  round the beautiful square in front of the opera and the cathedral.  Media vans were gathering and there was a palpable air of excitement as 6.30 pm approached, the time the demonstration would have started. Suddenly everywhere car horns were blaring, a cacophony of noise and cars started to drive past sounding their horns in an orchestrated parade, bystanders clapped, some brought out their German flags and memorably one man ran across the road with a placard reading ‘I am Lutz’ referring to the self styled leader of Pegida. The police in vans gave chase to some of the cars. The police on foot in groups if two or three moved through all the bystanders  in a calm but firm way, moving people on and dispersing the more obvious suspects. I tried to take in  just who was there, noting both young and old, far more men than women, a group of vociferous wheelchair users, many a overheard conversation about being certain to be there next week and several admonishments to ‘be punctual’. It would be falling into their stereotyping of what it is to be German  to say it was a deeply German non demonstration……Tomorrow I am going to the Frauenkirche to hear the interior minister Thomas de Maziere talk about »Was will das Volk?« what do the people want.That is after a day, I hope, installing work at the Kreuzkirche,