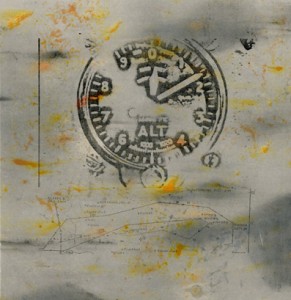 The Destruction Prints. I to XXIV.

The bombing of Dresden by British and American forces on February 13th and 14th 1945, and the consequent firestorm, remains one of the most contentious acts of World War II.

There is a considerable filmed archive, taken by both Allied and German sides during the devastation of the city, and by the Germans in the aftermath. There is also a wealth of testimony, both contemporary and recollected, ranging through diaries, photographs and memoirs, to combinations of fact and fiction, such as Kurt Vonnegut’s satirical novel ‘Slaughterhouse 5’, and Harry Mulisch’s ‘Stone Bridal Bed’.

Historians and politicians have dwelt minutely on the bombing of Dresden, over and above any other single act of destruction in World War II. Questions, both actual and moral, continue to be debated.  Specifically, these concern the responsibility for the raids, and the number killed.  A German Commission of 2010 confirmed that approximately twenty five thousand people were killed. This is fewer than had previously been estimated, and considerably less than were killed in raids on other German cities.

In a twist of fate, the bombing liberated the small group of Jews who remained in Dresden as well as some prisoners of war. On 13 February 1945, Victor Klemperer had assisted in delivering notices of deportation to some of the last remaining members of the Jewish community. Fearful that he, too, would soon be sent to his death, he used the confusion created by the allied bombings, and the fact that the Gestapo HQ with all its records was destroyed, to remove his yellow star. He and his wife Eva then joined a refugee column, and escaped into Allied-controlled territory.

The images in these prints are clipped from verified film archives, and plans of the British flight path. Transformed through both digital technology and through print they are intended to create a mood and a sense of the trajectory, rather than to describe specific moments or events.