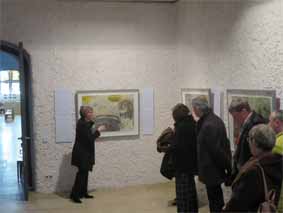 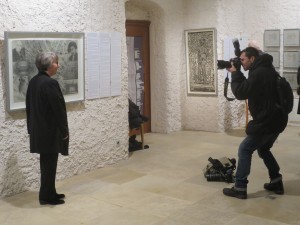 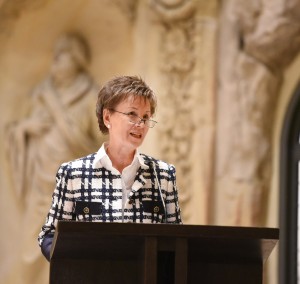 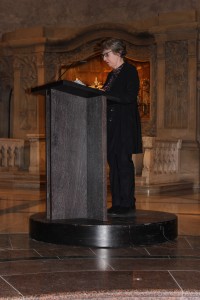 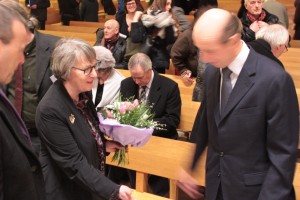 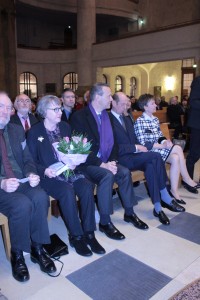 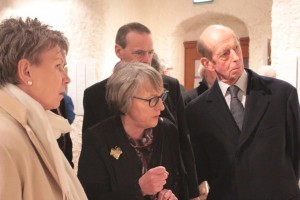 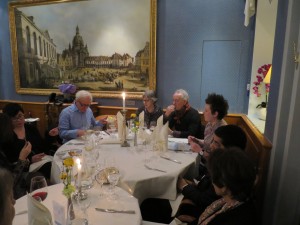 This is a brief summary of 11th to 15th February in Dresden.

I flew BA from Heathrow to Berlin, I arrived, and my luggage did not. By the time we got to our lovely hotel opposite the Frauenkirche in Dresden there was no indication that it would. So Chris and I went shopping for everything I required, a challenging and expensive few hours.

The next day started early with a meeting at the Kreuzkirche with the church and friend and artist Terry Duffy and a spot of coffee. Then a quick low key and as ever enjoyable visit to the Grafikwerkstatt to whom the greatest thanks are due. The back to a spot more shopping, as no sign of the suitcase. The afternoon started promptly with a talk in German to the Dresden organisation for Christian – Jewish understanding at the Kreuzkirche. A good attendance and my German in reasonable form, with some helpful interventions by those bi-lingual members of the audience.
Swiftly followed by the arrival of the press and the TV. Then the arrival of a teacher from the Plauen Gymnasium, the school my mother went to,  with some current pupils for a half hour question and answer session.
The ‘midisage’ started at 5.30 pm and the church was very full. I was seated on the front row next to the British ambassador, who then had HRH the Duke of Kent and the Mayor next to him. This was new territory, as new as the clothes I was wearing. First the Vicar of the Kreuzkirche Holger Milkau made thoughtful speech about the work and the exhibition. Then Eveline Eaton Chair of the Dresden Trust spoke about the trust. HRH Duke of Kent then gave the Dresden Trust medal to the Mayor Helma Orosz and Eveline Eaton gave her a symbolic cheque for the next Dresden Trust  project. President of the DT Alan Russell then presented her with his new book on the work of the DT and then the Mayor spoke. The Mayor’s speech quite personal to me and whoever had written it had looked closely at the exhibition. Finally I spoke and my speech is here. The Mayor then presented me with flowers. I then led her, HRH, British ambassador (and translator, who was brilliant) round the exhibition. This was not scripted, but I could not see how else they could see and comprehend even briefly,the work. I did this in a nervous and garbled mixture of German and English. HRH was interested, knowledgeable and responsive, a remarkable man and with tremendous stamina as I was to see over the next few days.

The evening was to continue with a big civic dinner but as I had family and friends there I had declined and we went for a long and enjoyable dinner at the Cosel Palais. At midnight my luggage arrived, mostly ( with immense thanks) due to the ceaseless work of the front desk at the hotel chasing it.

A family breakfast followed by a meeting with a Guardian writer journalist at the Kreuzkirche. Late morning reunited with my own clothes I changed for the Dresden City Lunch at our hotel with German President Joachim Gauck, Archbishop of Canterbury, Justin Welby, HRH, and the Dresden Trust Board at al. Fancy lunch, no speeches and then at 3.15 met up with Chris and others to walk to the Frauenkirche for the Ceremony of Remembrance. Security very tight, invitations and passports required. Great music, address by Archbishop Justin Welby, (the one the Daily Mail and all the English press, quite mistakenly thought was an apology for the bombing of Dresden). Also Mayor Helma Orosz and President Joachim Gauck, both fine speeches. Gauck memorably said, ‘we know who started this murderous war’ The outside, freezing cold but peaceful to big stage and set up on the Neumarkt for more speeches and the direction to join the Menschenkette. This is  the Human Chain that citizens of Dresden form by holding hands around the entire city on the 13th February at 18.00 for ten minutes to symbolise peace, tolerance and a united city. We joined it at the new synagogue having met up with Rabbi Alexander Nachma and synagogue director Dr Nora Goldenbogen. Then on (with a brief interlude for a bowl of soup provided by the city) to the opening of the ‘breathing’ light installation by American artist Stuart Williams at the Hofkirche.

Another literal draw for breath and the addition of some much needed layers of clothing and back to the Kreuzkirche for the Ecumenical service. Again fantastic music, much more contemporary than the Frauenkirche. Considerable number of moving contributions including Dean John Witcombe and Bishop Dr Christopher Cocksworth both of Coventry. We have seen a lot of the Coventry group including the Mayor as they are staying in our hotel. Then a late dinner with our friends and bed after midnight.

Not too early a start, another mega German breakfast which involves mostly deciding what not to eat. Downstairs at 10.30 for the walk to the Semper Opera for the ceremony of the Dresden Prize 2015 to be awarded to HRH the Duke of Kent. Long ceremony of speeches, films and terrific music.  Speeches by the head of the Semper Opera, a couple of government and state ministers and HRH who did brilliantly both in German and English. Ended up with Orchestral Manoeuvres in the Dark (much to Chris’s delight) who were tremendous and had the whole place on their feet clapping.

Followed by another intimate lunch with HRH, the Mayor, Justin Welby and al. Seated between Bishop Christopher of Coventry and Nick Marden HRH’s  private Secretary, both completely delightful and interesting, an eye opening experience. Talk about moving between worlds.

Afternoon off from civic duties and a visit to the astonishing Panometer which I have written about before. I then had a pre-dinner meeting with Hermann Lappe, a fascinating man who was the head of the Jewish community in Dresden, instrumental in the building of the new synagogue and now an educator on German Jewish history. Then we (Chris and I, my brother Peter and our friends) were all very generously invited to dinner by Bishop Christopher, again at the Cosel Palais together with Bishop Boll of the Frauenkirche, Justin Welby and his fascinating trouble-shooter David Porter, John Witcombe and other vicars from the Frauenkirche. What a fascinating evening, with Bishop Christopher adroitly swapping us between table so we got to talk to a variety of people including Justin Welby who was I think in fine form, certainly very talkative. Again a late night.

Packed up ready to leave and then to the Frauenkirche sitting high up in the 2nd tier gallery with a great view and acoustics. Again contributions from John Witcombe and Bishop Christopher and major address by Justin Welby in English. After that a lunch in the reliable Augustine Keller with our friends, my brother and Terry Duffy who has been such an asset and fun on this visit. His new work the Coventry Dresden Cope is hanging above the later in the Kreuzkirche.

Then to the train for Berlin and time to draw breathe again.