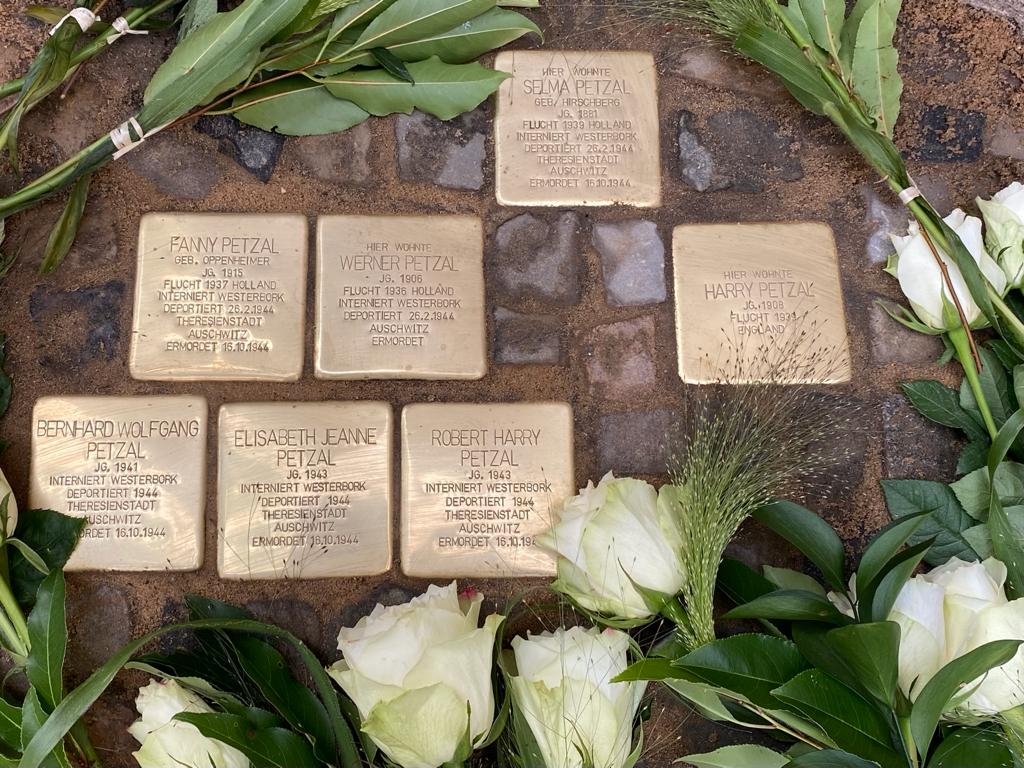 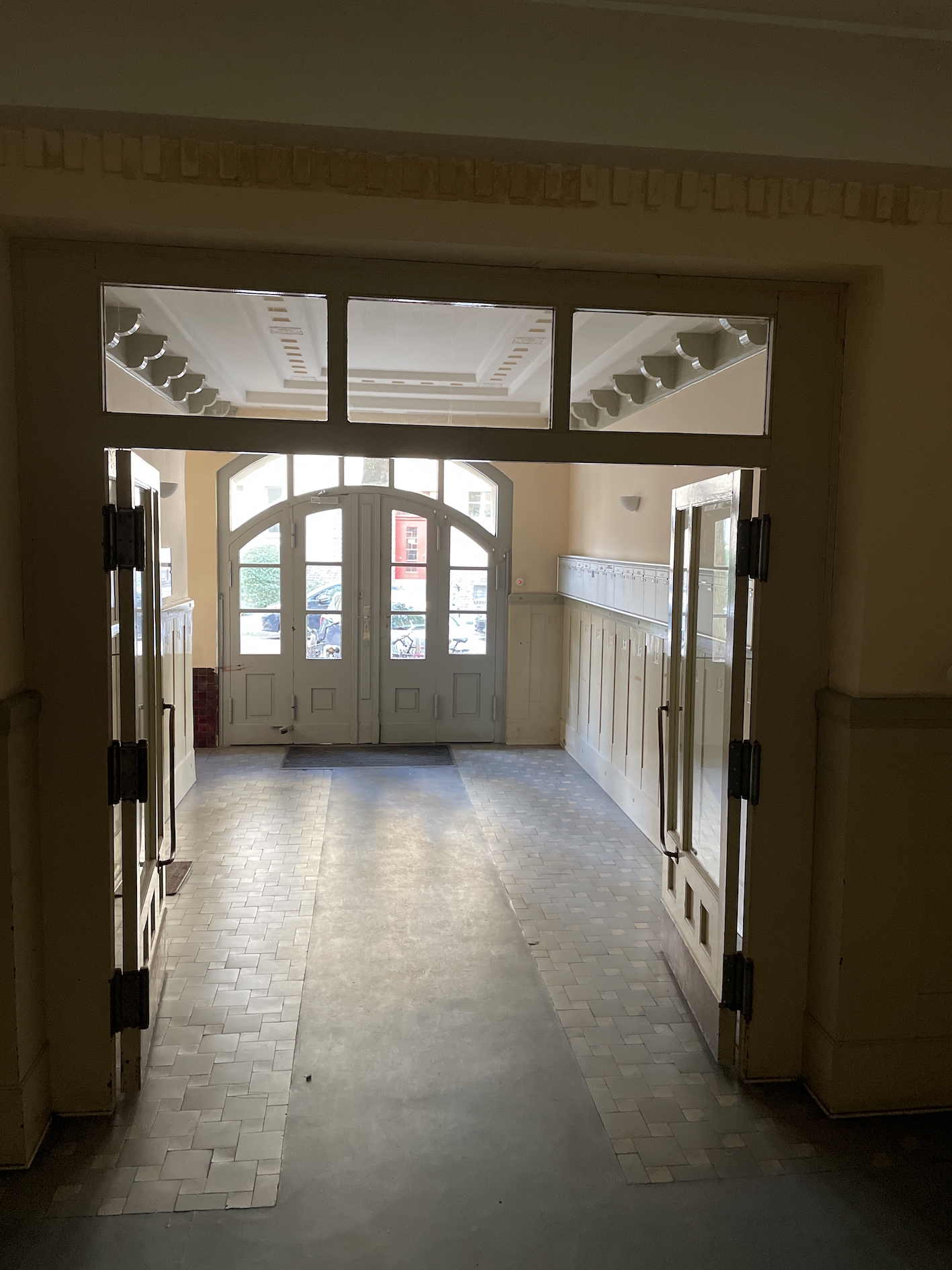 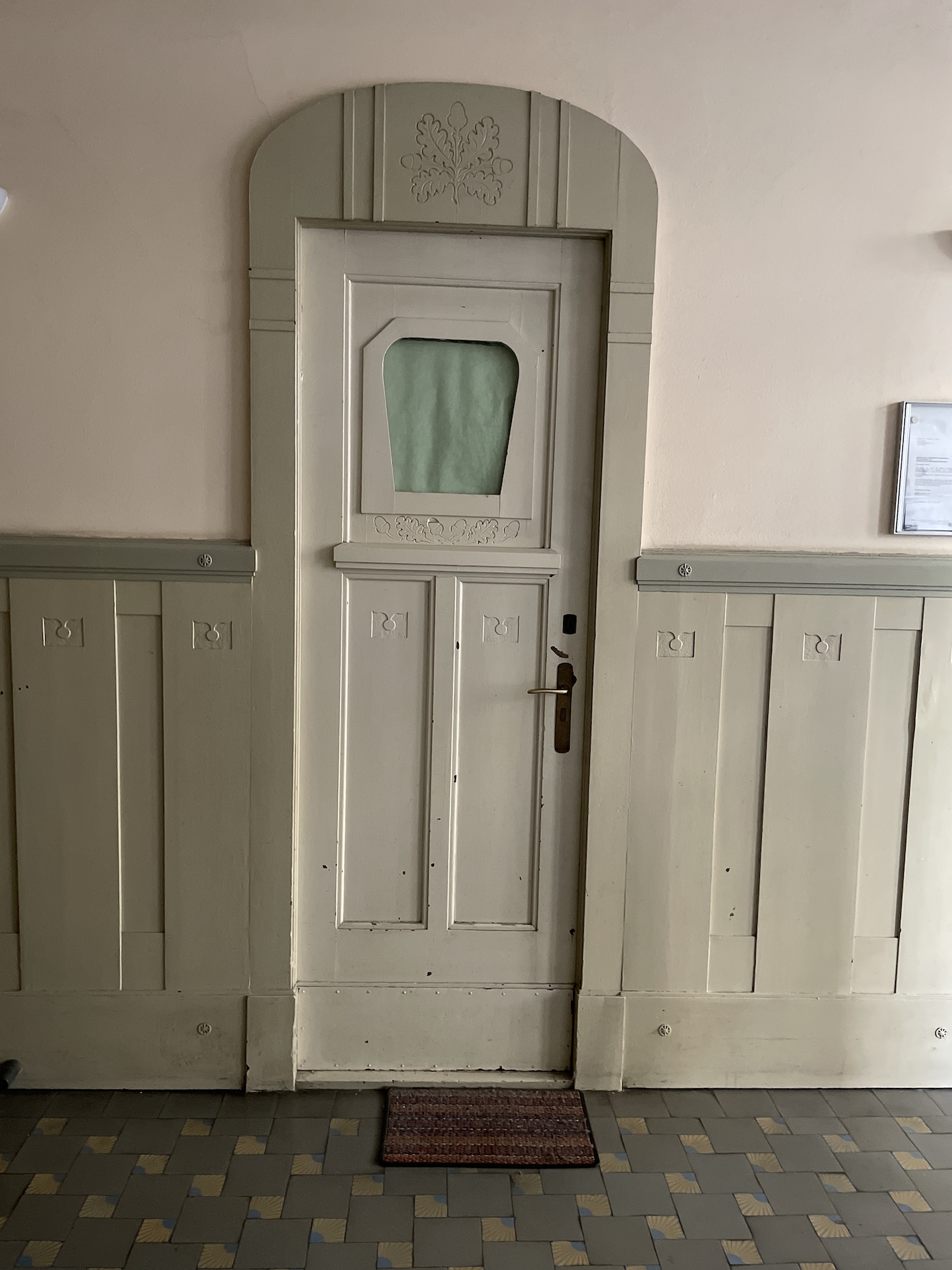 News from 2020: Dissent and Displacement: a modern story

This exhibition has now finished

Monica Petzal ‘Dissent and Displacement’ – Leicester’s New Walk Museum,
There is a 110 page full colour book price £10.00 to accompany the exhibition, with a foreword by Rabbi Julia Neuberger.
This can be bought online here

‘Dissent and Displacement’ is about storytelling and how we reflect on our lives.
Contemporary printmaker Monica Petzal explores opposition, persecution and persistence inspired by her German Jewish refugee heritage and the German Expressionist collection in Leicester. Interweaving threads of family, politics, culture and art, the narratives range from the rise of National Socialism in 1930’s Germany to the life of a Syrian refugee doctor in Leicester today.

Using original sources, it brings together contemporary collaged and painterly lithographic prints with accessible descriptive text, as well as German Expressionist work from the artist’s own collection, archive objects, photos and film.
New Walk Gallery holds the biggest collection of German Expressionist Art in the UK.

Dissent and Displacement is an exhibition that celebrates storytelling and the way in which we,as humans reflect on our lives. Inspired by the museum’s German Expressionist collections and Monica’s refugee heritage, the themes of opposition, persecution and persistence are explored through a series of large-scale panels. Interweaving threads of family, politics, culture and art, Monica’s narratives range from the rise of National Socialism in 1930’s Germany to a Syrian refugee doctor living in Leicester today.

So why did this artist who has exhibited work across the UK and beyond, chose Leicester to premiere her new exhibition? Monica said: “I was inspired by the exceptional German Expressionist collection in Leicester and the equally remarkable history of the city. I want to bring alive through images and narrative a rich mix of stories about opposition, persecution and persistence. This exhibition is at least, in part, about the benefit of refugees whose generosity made this collection. Leicester deserves its continued reputation for being a City of Sanctuary.”

She continued: “We understand that history repeats itself and current events in Syria make us all despair. The story I tell of a Syrian refuge now living safely with his family in Leicester reminds of the devastation caused by such persecution.”

Dissent and Displacement charts the journey of migration from East Prussia right the way through to the arrival (and welcoming) of individuals setting up home in Leicester, one of the UK’s most diverse cities. The exhibition begins with the artist reflecting on her maternal Jewish grandparent’s journey from East Prussia to Dresden as they escape anti-Semitism, through to her paternal family’s harrowing experiences of the Westerbork transit camp in Holland to their eventual deaths in Auschwitz concentration camp.

The exhibition moves on to depict the arrival of Monica’s parents in England, (on false papers, like many contemporary refugees), covering the end of World War 2 and the catastrophic bombing of Dresden.

Dissent and Displacement poses the question – what is it like to become British? Looking at the themes of Naturalisation with a comparison of the experiences of Monica’s own parents with that of the Syrian Doctor living in the city of Leicester today.

To end, Dissent and Displacement celebrates Leicester, from its reputation as one of the most inclusive cities through to its recent renaissance, (thanks to the spectacular success of its football team and the discovery of one history’s most notorious kings- Richard III).

Both Leicester and Leicestershire have a long- established history of dissent and difference. As far back as the 14th Century with the theologian and reformer John Wycliffe, the Quakers with their Leicester founder George Fox, through to Alice Hawkins, one of England’s leading Suffragette’s. In more recent years Leicester has thrived on diversity and immigration from the settlement of thousands of Ugandan Asian’s in the 1970s through to its Sanctuary status for refugees and asylum-seekers in 2007. Contemporary Leicester has over 55 different types of religious communities’ in almost 200 actively used centres. It also has a thriving LGBT community who have also contributed towards this exhibition.

The final two pieces of the 36 in this exhibition will be created digitally, and will not be completed until early 2020, taking into account the results of the General Election and whether we leave the EU.

Dissent and Displacement will include an interactive experience, where visitors will be able to contribute to a collage made up of pieces of print left in the gallery. Monica is keen to provide an audience of all ages, with opportunities to interact with the exhibition, to post on social media and to even take away their own small pieces of art.

Alongside the exhibition, visitors will be able to purchase a book with a foreword by Baroness Rabbi Julia Neuberger DBE. A donation from the sale of each book will go to the Refugee Council.

Monica continued: “I make no apologies for wanting to deal with such a serious subject matter. I want visitors to be engaged and provoked and to understand the connections between my work and the German Expressionists in the next-door gallery. I feel very fortunate to be showing in Leicester, this brilliant, diverse and lively city in an amazing space.” 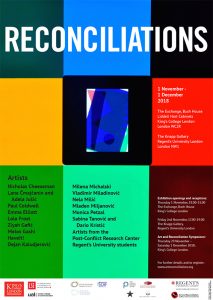 I will be exhibiting excerpts from the Coventry Dresden Towers at Kings College London from the 1st November 2018 and from the Dresden Indelible Marks exhibition at the Knapp Gallery at Regents College from the 2nd November 2018.
This is part of my participation in the AHRC funded ‘Art & Reconciliation: Conflict, Culture and Community’ on which I am on the advisory board. 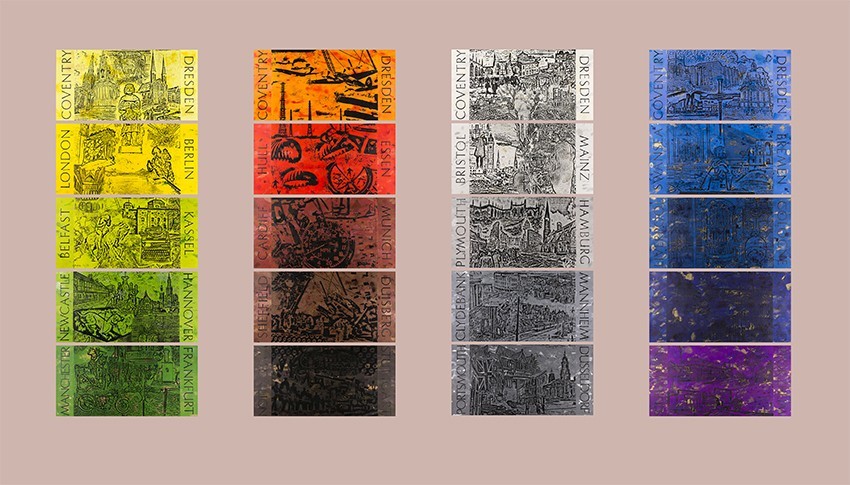 I am delighted to be currently showing at the International Printmaking Bienale in Duoro, Portugal, invited by one of my printroom artists Danielle Creenaune.

A fascinating piece about dentistry under the Third Reich, including my grandfather Dr Erich Isakowitz. Read Malcolm Bishop’s article in the Dental Historian.

To a death in sweating wakefulness‘ at the Pie Factory, Margate 2016 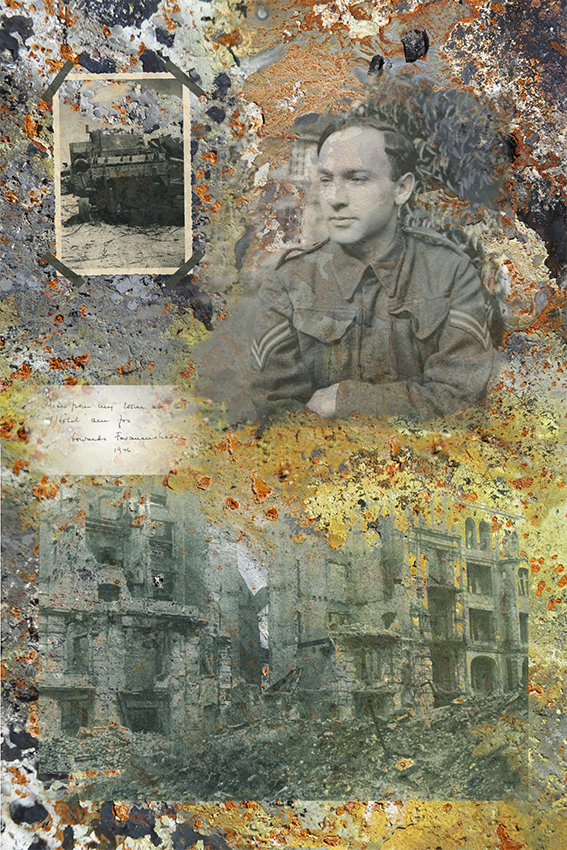 To a death in sweating wakefulness was an exhibition by Dawn Cole, Johanna Love, and Monica Petzal. Each artist traces back through their own family archives, German and British, to explore the emotional and physical impact of the conflict during the First and Second World War. All three artists share a fascination with looking back to the impact of war and conflict present in their familial pasts. Each draws on family photographic archives and oral histories to make work that embodies the inescapable emotional and physical uncertainties of living within conflict.

Monica Petzal focuses on her parent’s experience as German Jewish refugees from the Nazis. This work references her father’s profession as a metallurgist, his role in the British war effort and his return to a devastated Germany in 1946 to trade the detritus of war as scrap metal to the USA. It also refers to the bombing of Dresden, her mother’s home city by the Allied air forces. The work is chiefly based on contemporary film and her father’s annotated photos and includes print, painting and found objects. The text for the work is available here. Some of the main images in the exhibiton can be seen here

Indelible Marks -The Dresden Project at the Herbert Museum and Art Gallery, Coventry  closed on the 7th February 2016 .You can read the book of the exhibition here. There is an article about the background and the work in Jewish Renaissance.

The Coventry Dresden Facetime  is being kept for the City of Coventry and ‘Blasted’ has been bought for the Herbert Museum permanent collection. It will shortly go on public view again as part of the ‘new aquisitions’.The 75/70 installation in Coventry Cathedral was taken down on Monday 18th April and will be retained by the City of Coventry under the auspices of Culture Coventry. The explanatory leaflet about the background and the content of the cathedral installation can be read here.

The Stolpersteine for my grandparents and mother outside the site of their former home at Werderstrasse 44, Dresden Plauen.

There is an article about the Dresden and Coventry projects in the winter 2015 edition of Printmaking Today, many thanks to Anik See who interviewed me, you can read it here….

There is information on this website about the Dresden Project in both English and German
From January 23rd 2015 until 1st March 2015 , the Dresden Project was exhibited at the Kreuzkirche, Dresden. This was for the 70th anniversary of the destruction of the city.The opening was on Friday 23rd January 2015 see images of the opening and the installation .
There was a special opening on Thursday 12th February from 18.00 in the presence of HRH the Duke of Kent  and invited guests at which I,  the Kreuzkirche Pfarrer Holger Milkau, the Mayor of Dresden, Helma Orosz  and the Chair of the Dresden Trust spoke.The TV coverage can be seen here.The speeches made the artist in English and  by Mayor Helma Orosz in German can be read here.
The Press Release by the Dresden Trust can be viewed here.
The City of Dresden Press Release in German release can be viewed here.

‘We must never forget those lost in
the Holocaust’