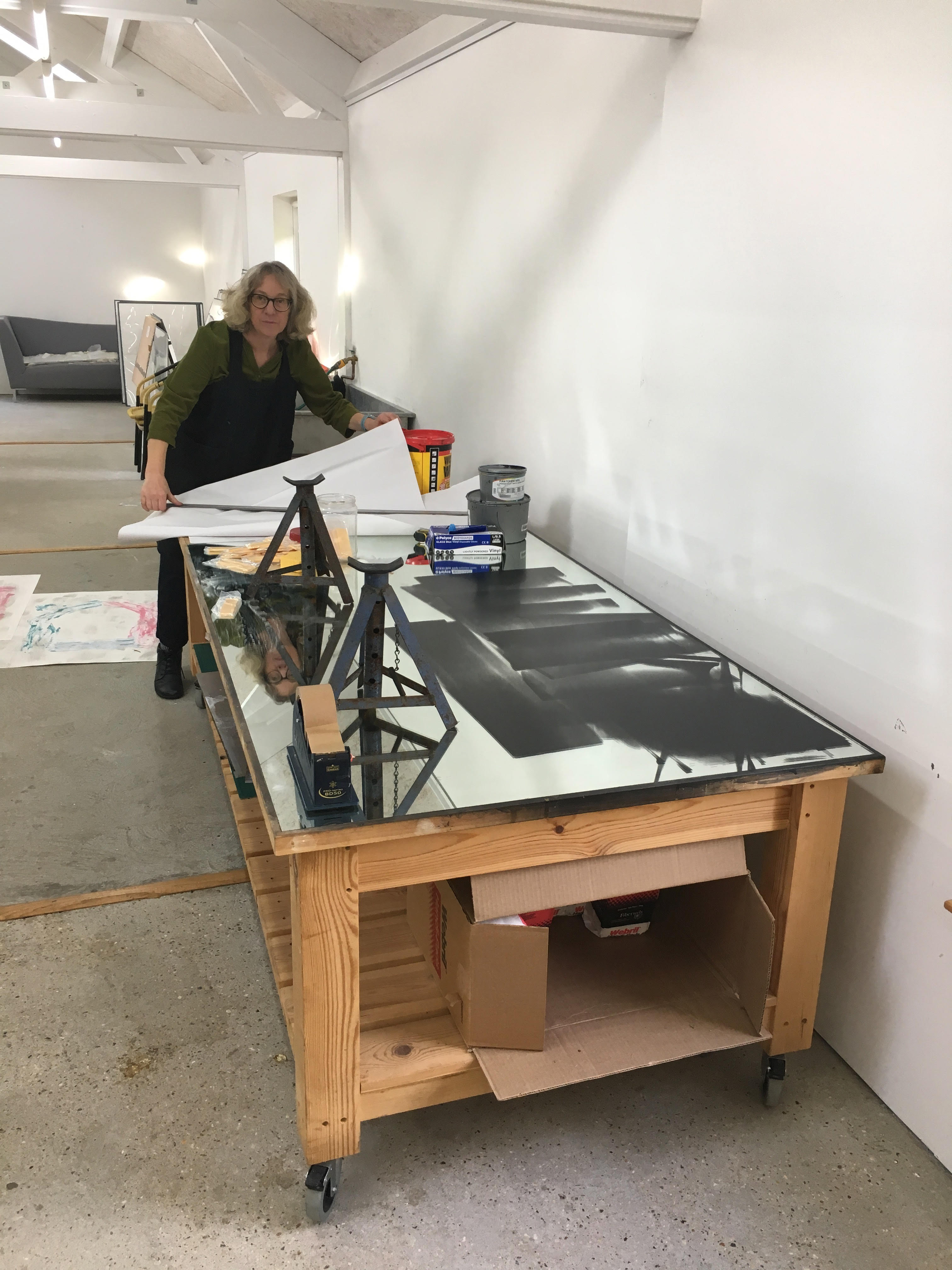 I was born three weeks after the Coronation to German Jewish refugee parents, and grew up in North West London close to Hampstead Heath. I occasionally went to North London Collegiate School, where I did not excel, after which I started art school. After studying painting at Kingston, I took an MA in Art History at Sussex under Norbert Lynton, and then went to the Royal College of Art Painting School in 1978, under the formidable Peter de Francia. I emerged at 28; an artist, an art critic and shortly afterwards a university lecturer, the latter two to make a living. I did a lot of writing to deadlines and plenty of studio work teaching painting, both of which I greatly enjoyed.

By 1992, three children later, and horrified at the status of women artists (including myself), I co-founded of The Foundation for Women’s Art. FWA was a charity aimed at increasing public knowledge and understanding of women artists through exhibitions, many of which I curated and wrote about. By the time it closed in 2006 I felt the issues had moved on.

In between, I had become fascinated by print and went in 1999 to Camberwell School of Art to take a 2-year MA in printmaking. I started to show my work more widely, and have it collected by museums and kind individuals.  I selected, spoke about, wrote about and curated print exhibitions; including co-curating ‘Process and Innovation, British Printmaking Japan’ at the Kyoto Museum.

I started a gallery in 2006. Printroom, in Hampstead, dealt in contemporary printmaking, it was tiny, and a modest and enjoyable success from the start. It moved with me and my husband Chris to Suffolk in 2014,  where it lives happily in a large converted cowshed and online (www.printroom.studio).

My interest in family stories is long standing and for some years I did life story interviews for the British Library, including some exceptional individuals: Annely Juda, Norbert Lynton, John Kasmin and Leslie Waddington. Increasingly I focused on my own family and their complicated and often untold stories, though I was too late to record them in person. In 2013 I went to work in the city print studio in Dresden.  These prints became ‘Indelible Marks: the Dresden Project’, shown in 2014 at the Kreuzkirche Gallery in Dresden, Germany for the 70th commemoration of the bombing, and at the Herbert Museum, Coventry, UK in 2015 -2016 for the 75th commemoration of that bombing. I also made a large print installation for Coventry Cathedral.

I was approached by the Dresden Trust, a charity that works on reconciliation between Britain and Saxony, to become a trustee, and I am now the Vice Chair. In 2014, after the referendum on membership of the EU was announced, I applied for, and got, my German citizenship; I hope more as a symbolic gesture than anything I will ever need to use.

Dissent and Displacement has been three years work, but the ideas have been in gestation all my life.
It has its own website www.dissentdisplacement.com which links here

Monica Petzal (MA RCA) FRSA www.monicapetzal.com
Monica Petzal was trained as an artist and art historian, and has had a diverse career as an artist, academic, critic and curator.
A citizen of both the UK and Germany she is intensely interested in her German Jewish heritage.

Monica has shown her prints and works on paper at diverse venues, including the Drawings show at the Hayward, the Whitechapel Open and the RK Burt Gallery, Bankside. Her most recent group exhibitions include: Bristol, Spike Island 2009; Originals 10 at the Mall Galleries; Printmakers Council at the Bankside 2010; ‘Lost for Words ‘at UCLH Arts 2012 and ‘Process and Innovation, British Printmaking Japan’ the Kyoto Museum 2012,The Pie Factory in Margate in 2016, Kings College and Regents College London 2018 as part of Art and Reconciliation and at the International Printmaking Bienale in Duoro.

Her most recent solo shows were at the Kreuzkirche Gallery in Dresden, Germany and the Herbert Museum, Coventry, UK in 2015 -2016.
Her work is held in various public collections including the Diocese of Dresden, Murray Edwards (New Hall College), Cambridge, the Victoria and Albert Museum, the Royal College of Art and the Herbert Art Gallery and Museum, Coventry and a  series of six large drawings at Sugar Quay House in London. Work is held in private collections in the UK, Germany and the USA.

Monica is the owner and director of Printroom www.printroom.studio dealing in contemporary printmaking since 2006.  Based from 2006-2013 in the gallery in Hampstead, Printroom now operates online and from a large studio and gallery space in Suffolk  and at selected Art Fairs.

She has selected and curated many exhibitions including the LCC ‘Spirit of London’ in the 1980’s,’Art,Age and Gender and ‘Uncanny Tales’, an FWA / Arts Council Touring exhibition in 1998 and 2004.She was a selector for: 7th British International Mini Print Exhibition 2008; Originals 09; Invited artist selector for Originals 10; Pushing Print in Kent 2010. In 2012 she was the co- curator with Rebecca Salter of a ‘Process and Innovation, British Printmaking Japan’ for the Kyoto Museum.

She was until recently a trustee of the Print Makers Council and remains an advisor, she is  a Fellow of the Royal Society of Arts. She writes extensively including for Printmaking Today. She talks on printmaking to students and practitioners and was a guest speaker at the Printopolis International Print Symposium in Toronto 2010.

From 1981 -1987, Monica taught painting, drawing and art history at the Byam Shaw School of Art, London College of Printing, Epsom College of Art, and the Farnham College of Art. She was visiting lecturer at St. Martin’s, Middlesex, RCA and for the Whitechapel and Saatchi Galleries.

From 1992-2006 she was a director of The Foundation for Women’s Art (FWA), a non-profit organisation that she co-founded in 1992. FWA’s mission was to increase public knowledge and understanding of the work of women artists, both historic and contemporary. FWA had an extensive programme of exhibitions and events educational and community activities, research and publications over a period of 14 years The work of FWA is currently being digitally archived.

Monica was an art critic for Time Out from 1979 -1988, including six months full time as art editor. She also contributed to Art Monthly, Artscribe, Artforum, THES, The Democrat, Printmaking Today and many other publications, and wrote several exhibition catalogues. She also worked as a freelance broadcaster on the arts, for BBC programs such as Woman’s Hour, Meridian and Kaleidoscope. Her most recent work in 2019 has been an interview for the artist Graham Crowley for his retrospective .

From 1992 – 2006 Monica Petzal worked as executive and project director for East City Investments a property company based in London EC1. Her role as client for this company involved commissioning and working with architects on major refurbishment projects. Architecture practices she has worked with include Caruso St. John, Sergison Bates, Alford, Hall, Monaghan and Morris (AHMM), Dow Jones Architects and currently in Suffolk with Studio James Grayley.

Monica Petzal is married to Chris, they have four grown up children and three grandchildren.They live in Suffolk, where they are restoring a set of old farm buildings and gardening 15 acres of land.

She is the Vice Chair and Treasurer of The Dresden Trust.

About the making of the Dresden prints

Most of the works in the Dresden /Coventry exhibition are photo lithography over monoprint..

The monoprints are one off grounds, rather like individual paintings, made by applying inks and mediums with rollers, brushes and other painterly methods repeatedly to a plain metal sheet. This is run through an offset litho press. This is the press that was used for most commercial printing before the digital age. This way of working utilises to the full the large rubber rollers of the press that retain the ‘picked up’ image. Each monoprint will go through the press up to fifteen times building layer up on layer.

The photographic images which are laid over the monoprints at a later date are made on Photoshop using a combination of photographs, scanned images, film clips and drawing using up to 15 layers in the programme. The flattened files are then commercially made into full size transparencies. In the studio the plates are made by projecting the transparency onto a sensitised aluminium plate. The plates are hand printed either by offset litho as in the Dresden Prints I to V or directly as in all the others. Although the photo litho plates can be repeated the prints are all one offs because each underlying monoprint is unique.

Thanks are due to the assistance and support of Torsten Leupold at the Dresden Grafikwerkstatt, all the staff at Camberwell College of Art and Artichoke Print Studio.

‘We must never forget those lost in
the Holocaust’